ONC welcomes from any entity (including health it developers, standard development organizations and other consortia) the submission of test procedures, test tools and associated test data (herein a "test method") for consideration for approval and use under the ONC Health IT Certification Program (Program). ONC’s goal is to optimize the certification experience by expanding its comprehensive portfolio of testing technology to support and validate the criteria and related requirements of the Program. A diverse mix of testing tools, including those developed in partnership with or solely administered by industry, or those transferred from government to industry can help optimize the certification experience.

On June 9, 2015 HHS published a notice in the Federal Register titled "Acceptance and Approval of Non-Governmental Developed Test Procedures, Test Tools, and Test Data for Use under the ONC Health IT Certification Program."  This notice and a related blog, informed the public of Office of the National Coordinator for Health Information Technology (ONC)’s policy that permits any person or entity to submit test method to ONC to be considered for approval and subsequent use by the ONC-Authorized Testing Laboratories (ONC-ATLs).

In August 2017, ONC published a blog post that discussed our transition to diversify the  Program’s testing. As ONC looks toward the implementation of Title IV of the 21st Century Cures Act (Cures Act), we have set a goal to transition the Program’s existing testing portfolio over the next five years to include as many industry-developed and maintained testing tools as possible in lieu of tax-payer financed testing tools. Achieving this goal will enable the Program to more efficiently focus its testing resources and better align with industry-developed testing tools, which could help support the “real world testing” envisioned by the Cures Act.

Alternative Test Method submissions will be reviewed by ONC for comprehensiveness and alignment with the Program's requirements. The applicant may be required to demonstrate and/or provide documentation of the following during the evaluation process:

ONC reserves the right to require additional demonstration of and/or documentation supporting test method design, capacity, and functionalities as needed. The diagram below outlines the steps in the evaluation phase. 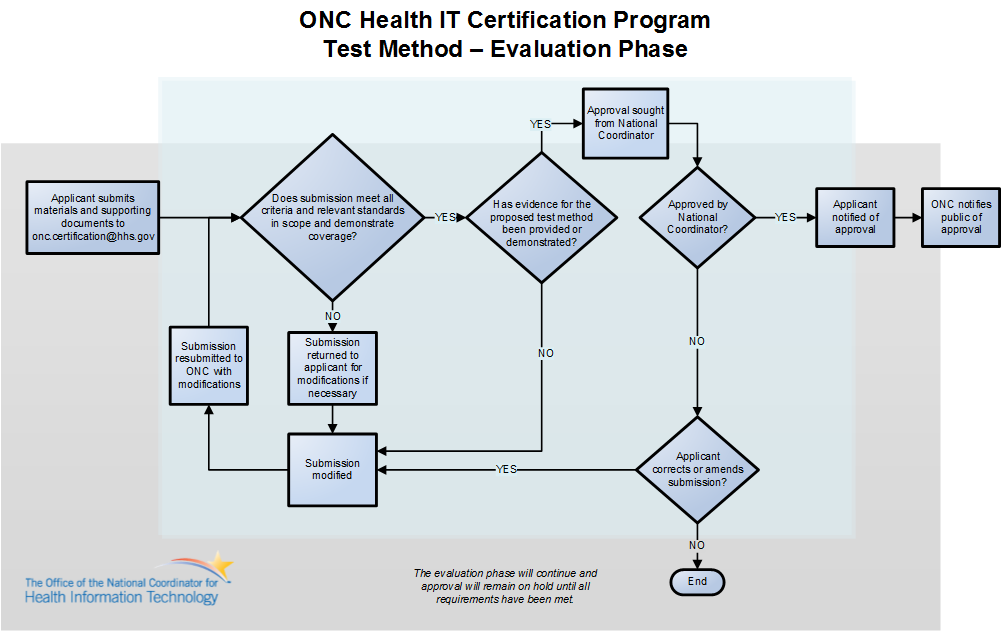 Upon approval by the National Coordinator, the applicant will be notified of the approval, and ONC will notify the public. Entities with an ONC-Approved Test Method will enter into a Memorandum of Understanding (MOU) with ONC to ensure continued alignment and support of the approved test method.

The complete set of Test Method for the ONC Health IT Certification Program can be accessed here: Testing Process and Test Methods