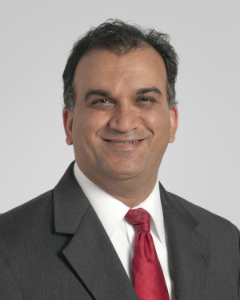 Focused on the intersection of information technology, informatics, clinical medicine and innovation, Dr. Anil Jain is VP and Chief Health Informatics Officer at IBM Watson Health. He was Co-Founder, Senior VP and Chief Medical Officer of Explorys, Inc. formed in 2009 based on innovations that he developed while at the Cleveland Clinic. In April 2015, Explorys was acquired by IBM as an integral component of the newly formed Watson Health business unit. In 2017, he was appointed by Congress to the Federal Health IT Advisory Committee established by the 21st Century Cures Act.

After obtaining a Biomedical Engineering degree and Medical degree from Northwestern University, Dr. Jain trained at the Cleveland Clinic and subsequently joined the Department of Internal Medicine in 1998. In addition, as a physician executive, he served as Senior Executive Director of IT where he led several innovations in research and quality informatics and created solutions to monitor the “meaningful use” of health IT to support the EHR Incentive Program. In addition, as a physician inventor, he co-founded Explorys in 2009 and joined full-time as Chief Medical Officer in 2011 until the acquisition by IBM Watson Health in 2015.

He has also previously led health IT projects for regional initiatives such as Better Health Greater Cleveland and the Case Western Reserve University School of Medicine’s NIH funded CTSA. In addition to participating in state-wide and national initiatives focused on driving quality & research through Health IT, Dr. Jain has authored more than 100 publications and abstracts and has delivered numerous talks on Health IT innovation through applied clinical informatics, interoperability, big data analytics and cognitive computing/AI.

He is an active member of the Health Information Management & Systems Society (HIMSS) and the American Medical Informatics Association (AMIA) and is a Fellow of the American College of Physicians (ACP). He is also a Diplomat of the American Board of Internal Medicine (ABIM).