Metadata, or data that describes other data.

In 2018, MaxMD implemented digital signature for CDA documents based on the HL7 Implementation Guide for CDA® Release 2: Digital Signatures and Delegation of Rights, Release 1. We have demonstrated this capability at multiple C-CDA Implementation-A-Thons and FHIR Connectathons. We believe the reason more implementers have not offered digitally signed CDAs is that ONC has not yet required C-CDA documents to be digitally signed.  Many issues and questions about data provenance would be addressed by requiring the use of digitally signed documents.

Image B. - MaxMD's digital signature verification service determines if a document has been altered after it was digitally signed or not. The green verification seal confirms this document has not been altered following it being digitally signed by Yan Wang on 6/11/2019. If even one single bit had changed, the verification seal would have appeared in red and it would have indicated the C-CDA digest was invalid. This is a certificate backed process with high trust for the identity of the person associated with the signing certificate. Needing the trustworthiness of digitally signed CDA documents is a common requirement in many use cases. The HL7 standard for defining how to digitally sign CDA documents is mature and services to deliver this capability are commercially available.  This is a proven, standardized capability that would be very beneficial for driving improvements in data provenance. 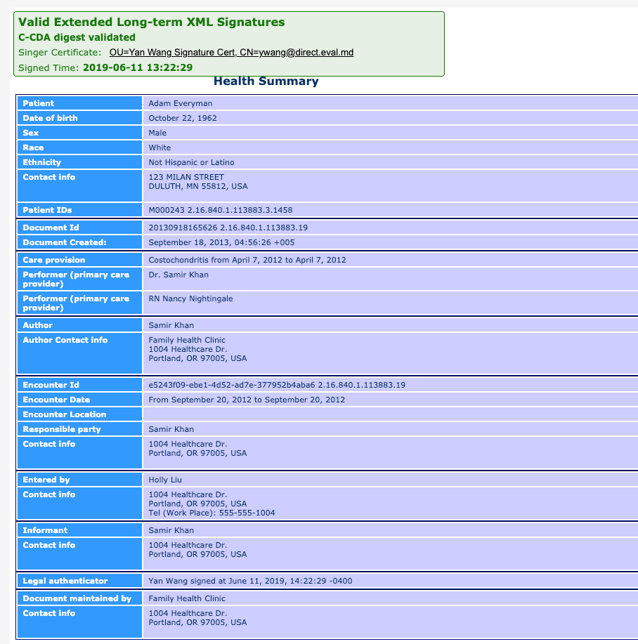