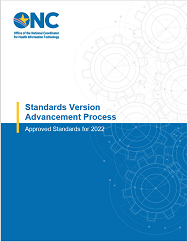 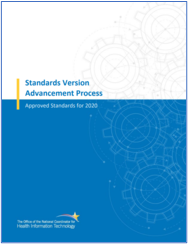 ONC has established the voluntary Standards Version Advancement Process (SVAP)1 to enable health IT developers’ ability to incorporate newer versions of Secretary-adopted standards and implementation specifications, as part of the “Real World Testing” Condition and Maintenance of Certification requirement (§ 170.405) of the 21st Century Cures Act.

Using SVAP, certified health IT developers are permitted to voluntarily use a more advanced version of the standard(s) and implementation specification(s) approved by the National Coordinator than is adopted in the ONC 2015 Edition Certification Criteria. Currently, this flexibility is limited to standards and implementation specifications that are adopted in the certification criteria required to meet “Real World Testing” condition of certification, which include § 170.315(b), (c)(1) through (c)(3), (e)(1), (f), (g)(7) through (g)(10), and (h).

Health IT developers taking advantage of the SVAP flexibility must ensure that their real-world testing plans and results of the certified health modules use these updated standards and implementation specifications. Additionally, certified health IT developers are required to provide advance notice to their clients and their ONC-Authorized Certification Body (ONC-ACB) before adopting the new standards.

Working with industry stakeholders and providing ample notice, ONC will follow a collaborative process to identify a more advanced version of the standards or implementation specifications, for approval by the National Coordinator.

The table below lists the standards and implementation specifications (and their versions) that will be considered for advancement and those that have received National Coordinator approval via the Standards Version Advancement Process. It does not include any minimum vocabulary standards as health IT can continue to be certified or upgraded to newer version(s) of identified minimum standard code sets, unless newer version(s) are explicitly prohibited by the Secretary. The table can be sorted by either "Current Standard/Implementation Specification" or "Regulatory Text Citation" by clicking on the column name.

The table below will be updated throughout the year to include standards with newer versions under consideration for the current SVAP cycle. However, if there is a newer version of a standard and it’s not listed below it can still be considered for inclusion in the current SVAP cycle. As with the 2022 SVAP cycle, future public comment periods will align with important standards development activities, such as the yearly release of new United States Core Data for Interoperability (USCDI) versions and HL7® standards related to C-CDA® and FHIR® US Core, thereby establishing a consistent cadence of SVAP comment periods and releases. Beginning with the recently completed 2022 SVAP cycle, the yearly SVAP comment cycle will be open from January to May with a final release of SVAP for that year to occur in June.

For the latest information on the approved standards for use, see the ONC Health IT Certification Program SVAP page.

On behalf of Medical Information Technology, Inc. (MEDITECH), I am pleased to comment on the 2022 Standards Version Advancement Process (SVAP).

EHR Association additional comments to ONC on the SVAP

As the review period of the Standards Version Advancement Process (SVAP) is coming to a close on May 2, 2022, the EHR Association would like to refresh our comments submitted on October 11, 2021. In that letter we expressed support for delaying the SVAP review and publication to aim for a summer 2022 SVAP publication, so the necessary HL7® FHIR® US Core and HL7® CDA® C-CDA Companion Guide guidance could be updated to reflect the additions made to USCDI V2. We also expressed a desire to proceed with all other proposed standards, as they were ready to move forward. Our comments are attached in full.

The Medical Imaging & Technology Alliance (MITA) is the leading trade association representing the manufacturers of medical imaging equipment and radiopharmaceuticals. We applaud the Office of the National Coordinator for Health Information Technology (ONC) in its work to promote the industry standards which enable continued interoperability for healthcare devices. MITA offers these comments in support of those shared goals.

Thank you for the opportunity to comment. These comments are submitted by Michael E. Prevoznik, Senior Vice President and General Counsel.

Comments from the Alliance for Nursing Informatics